Should cannabis be sold alongside alcohol?

Home News Blog Should cannabis be sold alongside alcohol?

Should cannabis be sold alongside alcohol? 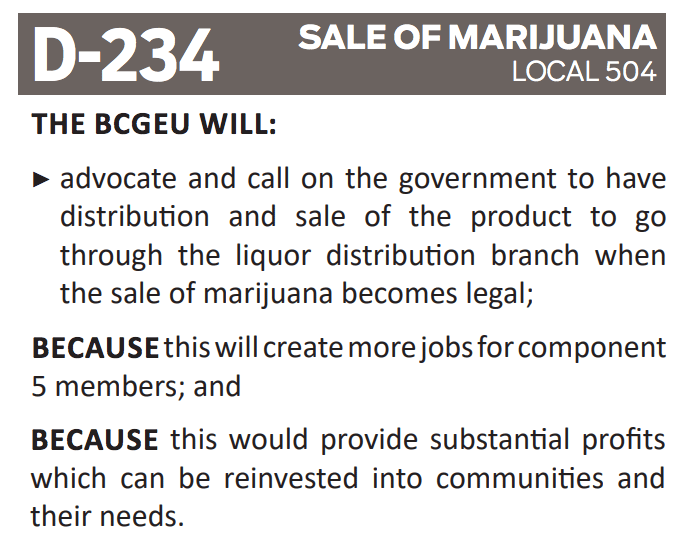 Resolution D-234 was passed by the BC Government and Service Employees Union (BCGEU) during their 2017 convention. Several years earlier, the union’s component 5 (Retail Stores & Warehouse) formed an unholy alliance with their traditional rivals, the BC Private Liquor Store Association (BCPLSA). The partnership claims that retailing cannabis alongside alcohol is “socially responsible” despite common sense, warnings from public health officials, and a complete lack of evidence.

Do you want to see cannabis alongside alcohol?

BC’s liquor industry has formed the Responsible Marijuana Retail Alliance and is lobbying hard for exclusive rights to sell cannabis, from within liquor stores. Meanwhile, the provincial government hasn’t ruled out the co-location of alcohol and cannabis.

Cannabis is legal for medical or recreational uses in many jurisdictions around the world, and every single one of them – save for Nova Scotia – has banned such colocation. In the interests of public health, the federal government’s own Task Force on Cannabis Legalization and Regulation, after extensive consultations, urged there to be “no co-location of alcohol or tobacco and cannabis, wherever possible.”

Early in the new year, the province will announce its retail model. If you feel that cannabis should be sold independently of alcohol, please make your voice known:

What do the experts say?

“Under no circumstance should retail sales be co-located with sales of other controlled substances such as alcohol, tobacco and/or pharmaceuticals.” – Canadian Public Health Association (CPHA) [Source]

“[The task force] heard strong support for prohibiting the co-location of cannabis sales with either alcohol or tobacco. Given the wide use and availability of liquor stores, concerns were raised about product promotion and exposing a larger population to cannabis products should sales be co-located, as well as the impact on cannabis consumers who are trying to avoid alcohol. Many also noted that this approach could help mitigate co-use, given what we heard about the risks of co-use on health and, with alcohol, the exponential effect on impairment. In all of the U.S. states that have legalized cannabis, there is a ban on the co-location of sales of cannabis and alcohol… The Task Force recommends that the retail environment include: No co-location of alcohol or tobacco and cannabis sales, wherever possible.” – Task Force on Cannabis Legalization & Regulation [Source]

“There was overall support among local government JCCR [Joint Provincial-Local Government Committee on Cannabis Regulation] members against co-location of non-medical cannabis and alcohol or tobacco retail operations.” – Union of BC Municipalities [Source]

“It appears that the potential downsides of a retail take away model that includes co-sale with alcohol could be problematic, where-as restricting cannabis sales to cannabis-only retail establishments has many advantages, at least as an initial starting point for the new system.” – Urban Public Health Network (UPHN) [Source]

“We also know the co-location and co-sale of alcohol, tobacco and marijuana is one of the most studied issues associated with its retail, and that public health research is clearly not in favour of the co-location of any of these three substances. Therefore, we support the recent view of the marijuana legalisation working group that it is best to not sell marijuana and alcohol in the same physical retail location.” – New Brunswick Medical Society (MBMS) [Source]

“[There is] a public benefit and a public safety benefit to not co-locating alcohol where possible with marijuana… Though in some instances people might choose to use those substances together, there is a public health benefit to keeping them separate.” – Brian Harriman, NB Liquor CEO [Source]

“Co-locating the two substances is not a best practice.” – Laura Lang, senior policy advisor with Yukon Ministry of Health and Social Services [Source]